On the eve of Britain’s unexpected participation in the European Parliament elections (22 May), Headland had the pleasure of welcoming the godfather of psephology, Professor Sir John Curtice, to explain to us what we might see come Sunday.

Just how well will the Brexit Party do? Is this the resurgence of the Liberal Democrats? Is Labour in as much of a state as the Tories? This is the Headland guide, based on Sir John’s insights, on just how much of a disaster this might be for the two main parties.

Voters aren’t changing their views on Brexit, but who might deliver or prevent it?

Sir John left us in no doubt. The electorate is still as evenly split as ever before and even more polarised in its opinions. This is a major factor driving votes.

For Remainers, a desire for a second referendum, or even to revoke Article 50, is central to their decision about who to award their vote to. For Leavers, it’s the desire to leave without a deal that’s influencing their vote.

As such, voters are opting to support the party that most clearly reflect these priorities. Parties seen to be either confused, unclear or trying to find ‘consensus’ positions are going to be punished.

For the Conservatives, things could be very bleak, with some polling suggesting they may fail to win a single seat. Polls suggest 56% of 2017 Conservative voters will be voting for Nigel Farage’s Brexit Party in the European elections. There is also a small but not insignificant chunk of Conservative Remain voters who intend to vote Liberal Democrat. As Professor Curtice put it, Brexit could be their tuition fees moment.

For Labour, the reverse is true – 30% of 2017 Labour voters are opting for pro-Remain parties and roughly another third, from their Leave-voting base, is opting for the Brexit Party.

It’s no surprise then that the Brexit Party is currently the bookies’ favourite to come first when the results come in – some polls put them as high as 38% (for context, UKIP at their zenith received 29% of the vote in the 2014 EU elections). The more interesting battle is currently between Labour and the Lib Dems for second place, with some Labour strategists believing Labour will lose badly to them in their inner-city heartlands.

The end of a Conservative-Labour duopoly?

Ordinarily, European elections are considered an opportunity for a protest vote, hence smaller parties often flourish. The two-party consensus continues to dominate when the campaigns are over and politics returns to a national focus.

Not this time. A long, hot summer of Brexit threatens and, as the below graph shows, large numbers of voters have no idea where Conservatives and Labour stand on our future relationship with the EU. With the electorate flocking to parties which most closely align with their views on Brexit, the ramifications for the two main parties could be huge. 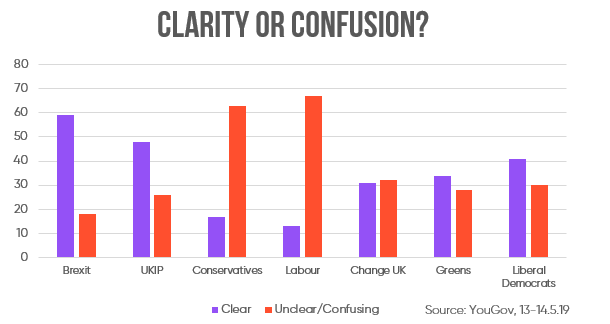 For the Conservatives, despite the certainty of this being the Party’s worst ever set of election results, it all makes little difference to short-term events – it may strike the final blow to the current PM if she hasn’t already gone. But it is likely that will all be settled tomorrow while the votes are being counted. Longer term, it will be for her successor to work out how the Farage genie can once again be put back in the bottle.

For Labour, a bad result (anything less than second place) will only further increase pressure on the leadership to explicitly back a second referendum.

With 30% of Labour voters indicating they will vote for a Remain party, Labour needs to act fast to prevent a long-term revival of the Liberal Democrats in Labour’s inner-city seats. There are, however, a number of prominent MPs and advisors to Corbyn who will be viscerally opposed to the idea.

Never before have the Conservatives and Labour faced pressure on so many fronts simultaneously. The Conservatives used to only need worry about losing voters to UKIP. Now they’re losing them to the Brexit Party on the one side and the Lib Dems and Greens on the other.

While it might not be quite that bad for Labour, it’s still likely to be a very uncomfortable outcome for Jeremy Corbyn. A general election might not feel like such a good idea after all.

Sign up to receive the latest news, views and insights straight to your inbox

If you would like to find out how Headland can help your organisation then please contact Suzanne Morris or Dan Smith.

Sign up to receive the latest news, views and insights straight to your inbox

This website uses cookies to improve your experience while you navigate through the website. Out of these cookies, the cookies that are categorized as necessary are stored on your browser as they are essential for the working of basic functionalities of the website. We also use third-party cookies that help us analyze and understand how you use this website. These cookies will be stored in your browser only with your consent. You also have the option to opt-out of these cookies. But opting out of some of these cookies may have an effect on your browsing experience.
Necessary Always Enabled
Necessary cookies are absolutely essential for the website to function properly. These cookies ensure basic functionalities and security features of the website, anonymously.
Functional
Functional cookies help to perform certain functionalities like sharing the content of the website on social media platforms, collect feedbacks, and other third-party features.
Performance
Performance cookies are used to understand and analyze the key performance indexes of the website which helps in delivering a better user experience for the visitors.
Analytics
Analytical cookies are used to understand how visitors interact with the website. These cookies help provide information on metrics the number of visitors, bounce rate, traffic source, etc.
Advertisement
Advertisement cookies are used to provide visitors with relevant ads and marketing campaigns. These cookies track visitors across websites and collect information to provide customized ads.
Others
Other uncategorized cookies are those that are being analyzed and have not been classified into a category as yet.
Save & Accept